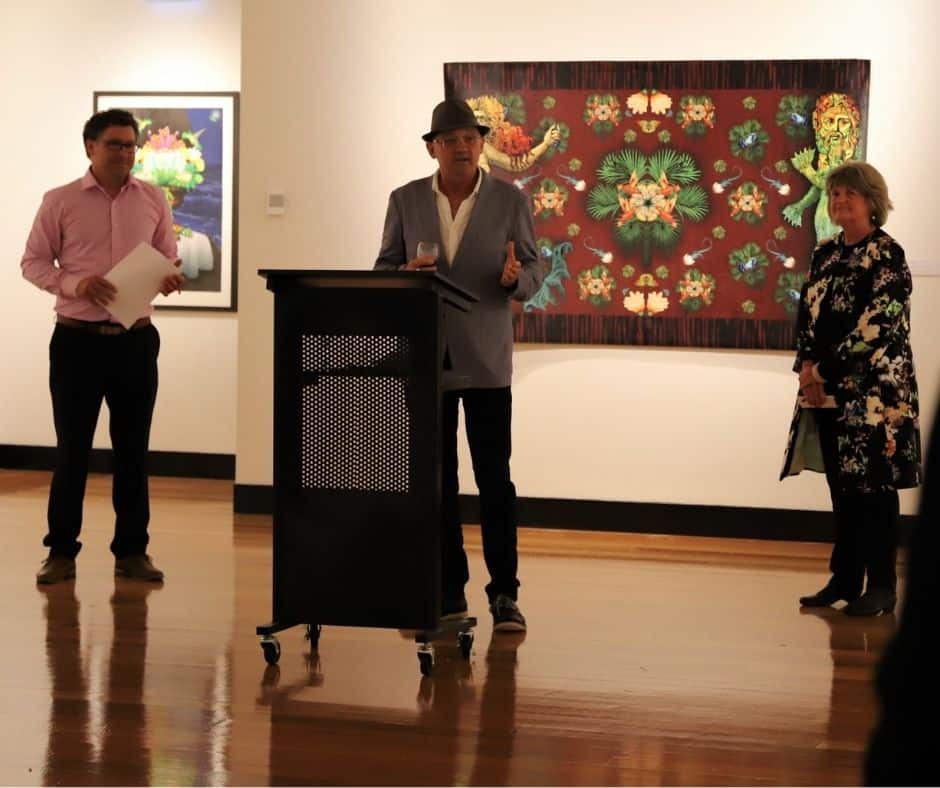 A contemporary exploration of cultural identity and the complexities of a cross-cultural position best describes renowned artist Milan Milojevic’s solo commission exhibition Terra Incognita: A duck-billed what?, which opened on Friday at the Devonport Regional Gallery.

The Hobart-based artist is a first generation Australian of German/Serbian parents, and for 40 years has engaged with the dilemma of growing up and belonging to three countries and finding a space ‘in between’.

Devonport Regional Gallery Director Geoff Dobson said Milan’s exhibition is part of the gallery’s Solo Commission program, which started in 2005 to provide Tasmanian artists with the opportunity to produce a new body of work for a solo exhibition.

Mr Dobson said the 2020 commission was awarded to Milan, however the exhibition had to be postponed due to the COVID-19 pandemic.

“Terra Incognita: A duck-billed what? is an exhibition of prints and three-dimensional objects of fictitious flora and fauna which are constructed through a combination of digital and traditional print technologies,” Mr Dobson said.

“Milan’s work depicts an imagined and unknown place constructed from collected stories of a homeland he never witnessed and is based instead upon memory, myth, fiction and fact.

“The synthesis of fact and fiction play a pivotal role in his practice, content that is informed and inspired by the aesthetics and visual language developed by18th and 19th century engravers and naturalist artists.”

Milan said the aim of this exhibition is to create a museum comprising of imaginary flora and fauna based on the Jorge Luis Borges book titled The Book of Imaginary Beings, which has been a catalyst for his work over the past three decades.

“By coalescing the inherent properties of traditional print and contemporary digital media I’ve developed a hybrid practice. This ‘hybrid’ approach to printmaking media synthesizes the form and content within my practice,” Milan said.

“The installation includes prints, dioramas, 3D constructed objects and animation titled Some days it rains, which is a collaboration with artist Leigh Hobba.

“In essence the exhibition will create a universe populated by hybrid flora and fauna that generate a sense of wonder in its audience.”

Milan’s latest exhibition was opened by Dawn Oerlich, the recently retired Burnie Regional Art Gallery Director, and will be on display until Saturday, 20 March 2021. The exhibition is also part of this year’s Ten Days on the Island, an international arts festival which features more than 450 participating Tasmanian artists and community members.

His most recent solo show was in September 2020 titled The land that never was at Colville Gallery, Hobart.

Milan has received awards from major national funding bodies has undertaken several international residencies in Scotland including: Peacock Arts in Aberdeen and at the Glasgow School of Art.

Milan has had numerous public art commissions, the latest being a collaboration with Leigh Hobba for the Royal Hobart Hospital (2020).