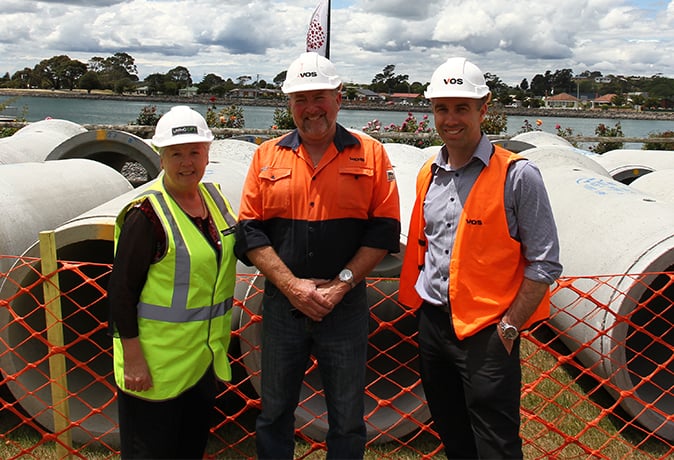 Contractors this week began the installation of stormwater pipes as a precursor to the project, which will be undertaken by Tasmanian firm Vos Construction and Joinery Pty Ltd.

Centred on Roundhouse Park, the project is being funded by a $10 million Federal Government grant and Devonport City Council cash reserves with completion due in late 2021.

Among the features of the park will be:

The Mayor Cr Annette Rockliff said she was excited to see work beginning on site.

“The Waterfront Precinct is the next step in the LIVING CITY project and the parkland – together with the privately established waterfront hotel – are certain to be significant developments in the city for generations to come,” she said.

Cr Rockliff said the Waterfront Park would draw people to the river both visually and physically, a long-held vision of Council.

“It is about creating new places, new experiences and new events and not just buildings.”

Vos Construction and Joinery Chief Executive Officer Kurt Jones said it was an honour for the firm to be involved in such an important development for Devonport, and the wider North-West region.

“It is an honour for Vos to be involved in such an important development for the Devonport, and wider North West Coast, region and we are excited to be undertaking this next major stage,” he said.

“This project provides an excellent opportunity for Vos to contribute to critical infrastructure that positively impacts the Tasmanian community, as well as creating employment and upskilling opportunities for Vos employees, sub-contractors and suppliers.

“Vos is committed to supporting and encouraging local industry.

“This project is very important in providing confidence to the local building and construction industry, and through all our subcontract partners, the project is expected to employ over 100 people over the construction phase.”