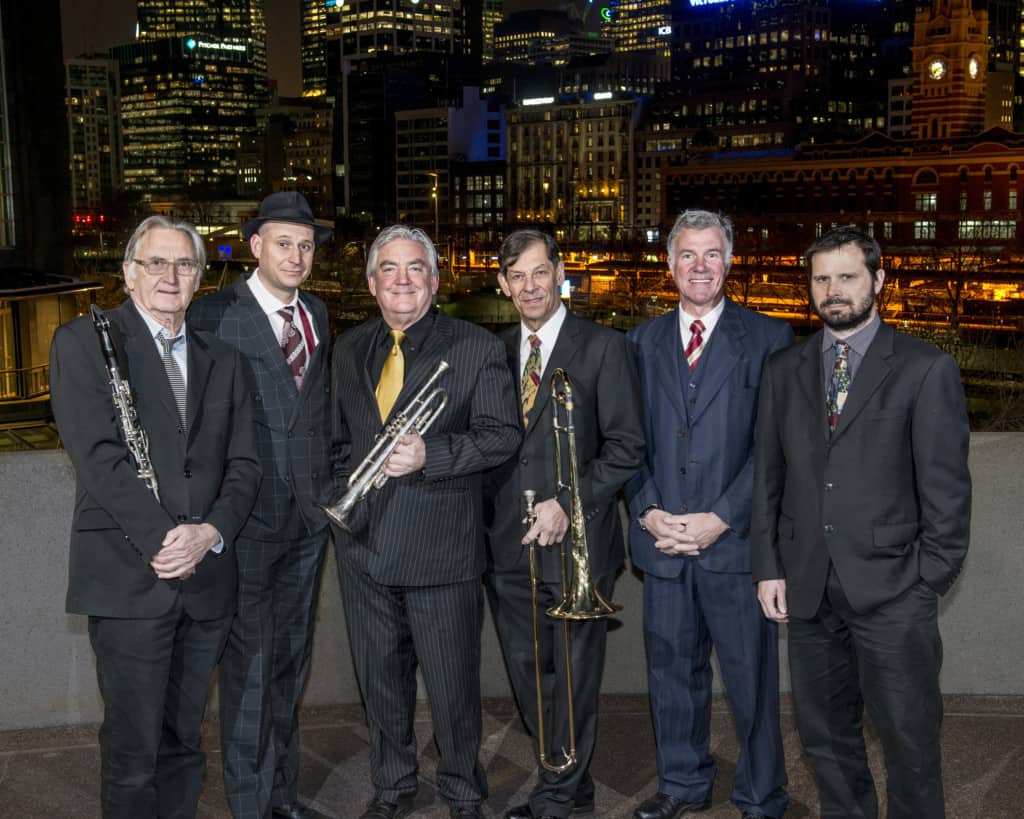 With about half The Syncopators having shared the stage for at least a quarter of a century, it is probably no surprise that group founder Chris Ludowyk suggests the popular jazz outfit does not need to get together all that often to practice.

“We probably only get together a couple of times before we go to a festival or are preparing to record a CD, just to brush up on a few things,” he said.

The Syncopators will be making their second visit to the Devonport Jazz Festival this weekend.

They have three performances – at Rubicon Grove on Friday 26 July between 6.30 and 8.30 p.m., followed by a tribute to the great Louis Armstrong at the Town Hall Theatre from 4 p.m. on Saturday 26 July before finishing up at the Ulverstone Wharf from 7.30 p.m. on the Sunday. Tickets are available from the venues.

While it may seem like a tough schedule, Ludowyk was not fazed.

“It is quite easy actually. We have got quite a few new fans since we were last down and we are looking forward to getting more this time,” Ludowyk said.

This year marks the 35th year since Ludowyk founded the group, which is known for its eclectic sound and a real desire to have some fun.

Trumpet player Peter Gaudion and clarinet and saxophone player Richard Miller have been with him from the outset while James Clark has been part of the group for 26 years.

Pianist Stephen Grant has had 10 years in the band and Rod Gilbert has been on the drums for five years.

The group has toured Europe 19 times playing at Jazz Festivals and in 2009 won the Australian Jazz Bell Award for one of their recordings.

Ludowyk said the group was looking forward to returning to Devonport.

“It is a nice festival but has certainly expanded since we last came.”

To be held from 25-28 July, this year’s Devonport Festival will be headlined by the great multi-instrumentalist James Morrison and is brimming with acts from Tasmania and the mainland, which will please both jazz lovers and the general public.

Other exciting elements of the Festival include a jazz tribute to the music of INXS, the RAN Navy Band, the ABC Radio live broadcast, a schools’ tour and Pure Jazz Sessions.

Tickets are on sale now and can be purchased through participating venues or the paranaple arts centre. Or for the full festival experience a Festival Pass for just $199 which gives access to more than 20 events.

Devonport Jazz will also feature a range of free events including a Jazz Style Street Eats event will be held on Thursday 25 July from 4 to 8 pm in Providore Place.

There will be 11 food vendors and the Speak Easy Pop up Bar will be open.

Entertainment will be provided by Django’s Tiger & City of Devonport Brass Band.

Musos in the Mall, sponsored by 7AD, will feature the RAN Band’s jazz group with dancing from the team from SwingMania. It will begin at 10 a.m. on Saturday 27 July.

Les Coqs Incroyables, Wendy Moles & Nick Hart, and Arman & Co will also be performing at free events across the weekend.