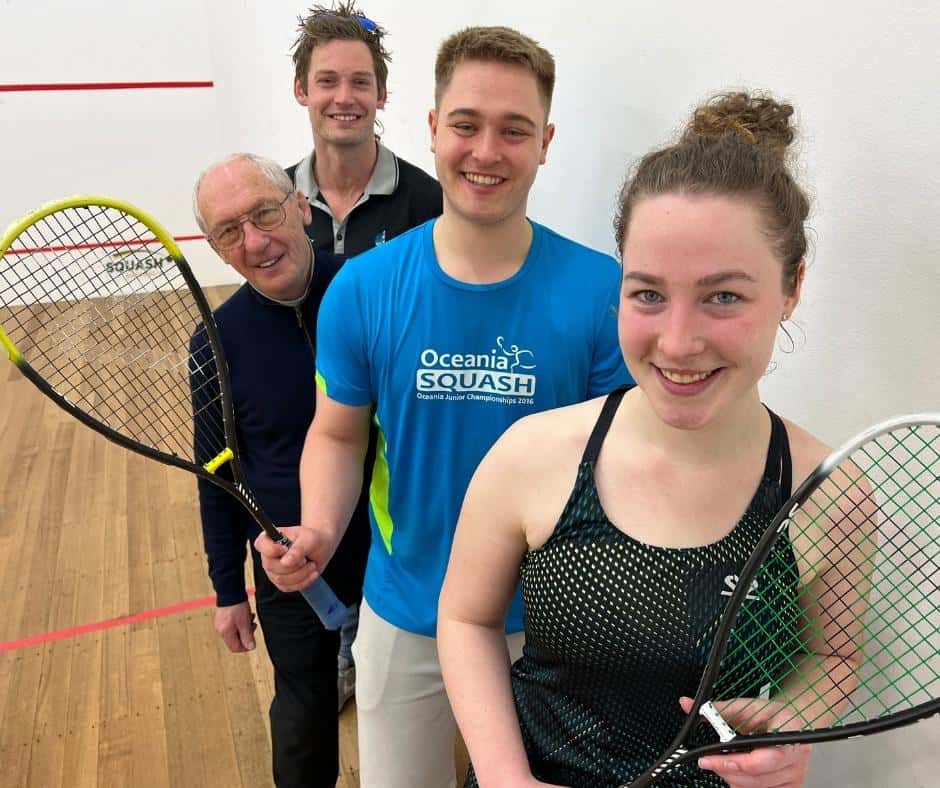 Devonport twins Grace and Jamie Pattison, 22, are no strangers to playing squash at an elite level, competing in national and state competitions from a young age.

But playing at a national level on home turf is about to become a reality for the talented duo, as Devonport hosts the 2022 City of Devonport Tasmanian Open – PSA from 7-11 September.

In conjunction with Devonport City Council, the Devonport Squash Club will welcome some of the world’s top players, including Australia’s Racheal Grinham, Alex Hayden, Jessica Turnbull and Rhys Dowling who have just returned from the Commonwealth Games in the UK. Grinham was one of the Australian flag bearers for the Opening Ceremony.

Taking time out from their university studies in Hobart, Grace and Jamie will have a home crowd advantage as they hit the court in front of family and friends next month.

Grace said representing Australia in three world junior competitions has so far been her playing career highlight, with the Tasmanian Open an exciting opportunity.

“Being able to play in a competition at this level is really good experience and we’re looking forward to playing on home turf,” Grace said.

For Jamie, who has been playing at state level since he was 12, the Tasmanian Open will enable him to compete against the best of the best.

“The game of squash is often labelled as physical chess, it’s mentally and physically challenging. Our family has played for a long time and Grace and I have both been playing since we were 8,” he said.

“It’s exciting to be playing against some of the best in the world.”

Devonport Mayor Annette Rockliff, said an event of this calibre will attract players ranked inside the world’s top 50, and with the highest seeds reaching potentially to the top 20 in the world, something not seen in Australia for over a decade.

Cr Rockliff said Council is proud to sponsor sporting events in the city that aim to encourage greater visitation to Devonport, stimulate the local economy and provide opportunities for community members to connect and celebrate through sport.

“Over the five days of competition, Devonport will host visitors from overseas, interstate, and intrastate all coming to visit and stay in the Devonport area,” Cr Rockliff said.

“The wider economic benefit for the city resulting from the event itself and spend by visitors in the city is estimated at $100,000.”

Devonport Squash Club President Leon Barnett said it was an honour to host the tournament, which is possible thanks to Council’s support.

“Having eight squash courts in the one centre, allows the Devonport Squash Centre to combine the 2022 City of Devonport Tasmanian Open with the Devonport Open Squash Graded Tournament,” he said.

“The Tasmanian Open is one of the longest continuously running tournaments in all of Australia, an event that has been running since 1940.

“The club has been working hard to host the tournament on home soil, after an unsuccessful bid last year which saw the Northern Territory host the competition.

“This is an exciting opportunity for our city to showcase our talent and see our players compete at an elite level at home.”

The City of Devonport Tasmanian Squash Open will be held from 7-11 September and will include the Challenger Tournament from 7-11 and the Devonport Open Squash (graded) from 9-11 September. Entries can be made at www.squashdreamhosters.com by 2 September. For more information contact Leon Barnett on 0488 546 040 or David Mulcahy on 0439 030 266.