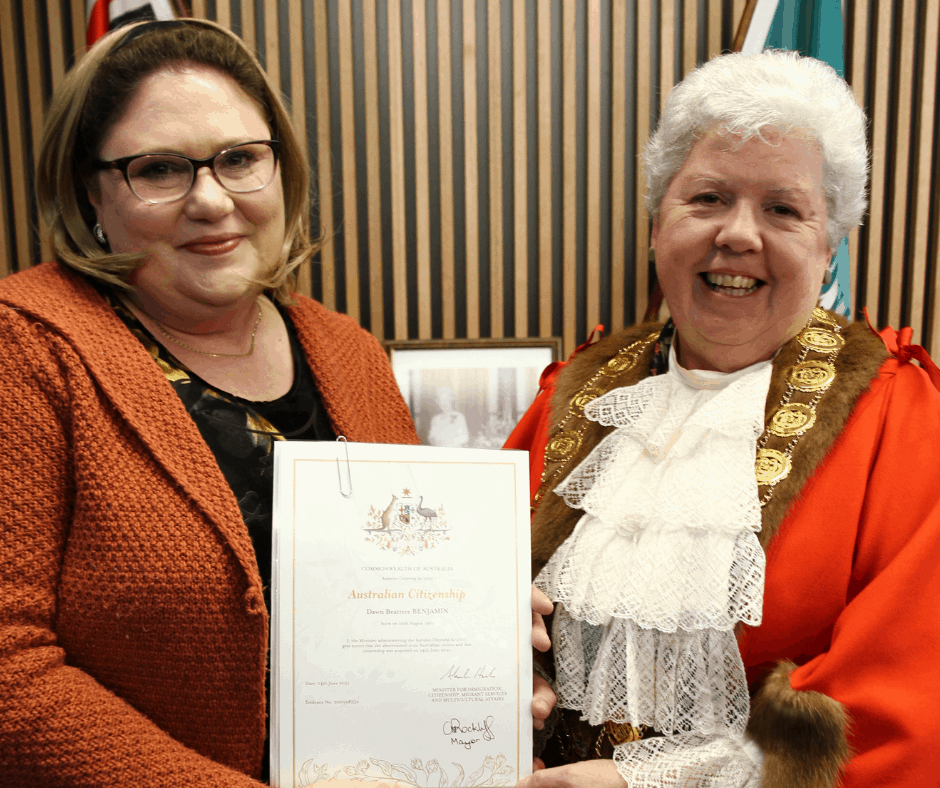 Cr Rockliff said the ceremony included a Welcome to Country and a message from the Honorable Alex Hawke MP, Minister for Immigration, Citizenship, Migrant Services and Multicultural Affairs.

“Assisting people in becoming Australian Citizens is one of the joys of the job. As Mayor it is humbling to learn about the joy these residents get from living in Devonport and it’s exciting to hear from their friends and the community about the contributions these new citizens make to our region,” Cr Rockliff said.

“Council is proud to host these official ceremonies every three months and encourage any members of our community wishing to officially become Australian citizens to get the process started by contacting the Department of Home Affairs, Immigration and Citizenship.”

New citizen Dawn Benjamin relocated to Devonport from South Africa eight years ago and has been excited about becoming an Australian Citizen since watching her son become one last year.

Ms Benjamin said she was proud to call Devonport home and finally become an Australian citizen in a country that has provided her with so many opportunities.

“Today has been quite an emotional day, renouncing my previous country, but also gaining a wonderful new life, with the Australian people who have been so great,” Ms Benjamin said.

“I love living in Devonport, I like the quiet lifestyle. I’ve been to the cities Melbourne and Brisbane and all over, and they are beautiful, but I like the lifestyle Devonport offers, and the people here.”

The formal portion of the ceremony, conducted in accordance with the Australian Citizenship Act 2007, included new citizens pledging their commitment to Australia, receiving their certificates and a gift from the Council (a native shrub) and singing the National Anthem.

The next Citizenship Ceremony will be held in September 2021. For more information visit council’s website at www.devonport.tas.gov.au/live/your-community/grants/major-minor-grants/

For more information on becoming an Australia Citizen talk to the Department of Home Affairs, Immigration and Citizenship, or visit https://immi.homeaffairs.gov.au/citizenship/what-does-it-mean