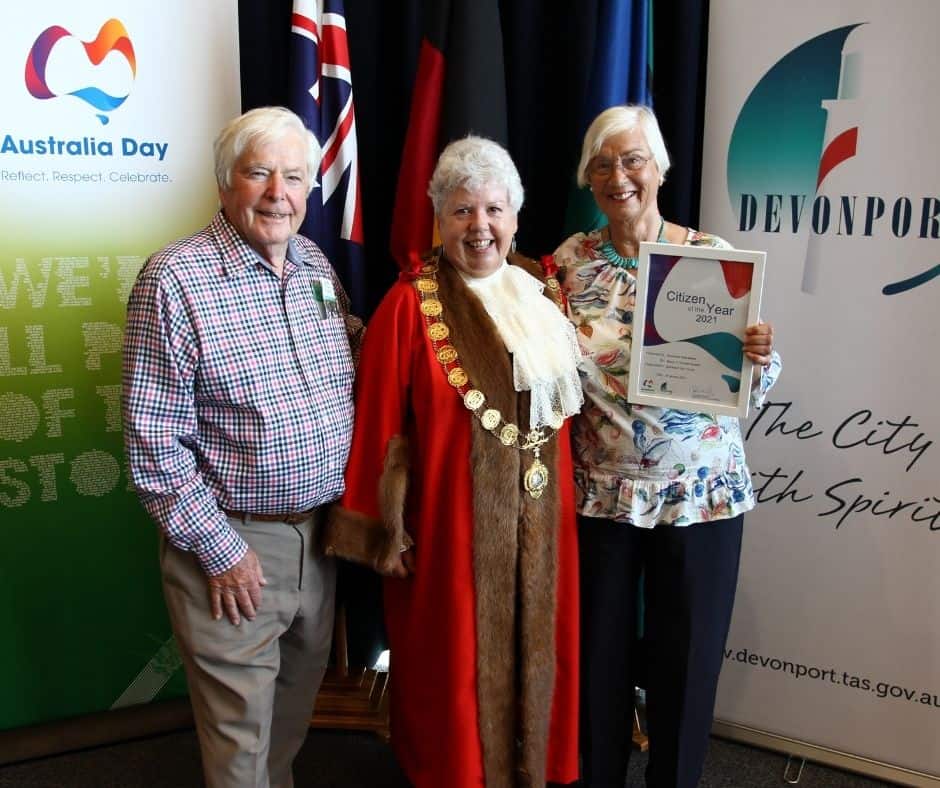 Cr Rockliff said Council was pleased to present an additional award this year, the “Spirit of the City”, which was introduced some years ago to recognise the outstanding achievement by dedicated and deserving non-residents, who have made a significant contribution to the promotion and advancement of Devonport.

“Congratulations to our awards winners and our new citizens. Devonport is a much richer community for having people like you supporting our city and choosing this patch of the North West Coast to call home,” Mayor Rockliff said.

“Australia Day holds a different meaning for many people and it’s important we all respect that and treat one another with kindness.

“If there is one thing that the past 12 months have taught us, it’s that our community spirit is strong when we need to band together. Australian society openly celebrates cultural diversity, and I am proud our city of Devonport can do the same.”

Today’s ceremony also included an address from Australia Day Ambassador and Incat group founder and chairman Robert Clifford, plus performances from the City of Devonport Brass Band, conducted by Tessa Laee, and the National Anthem was performed by Coastal Music Teacher Lilla Fabrik.

Bios for award winners – Community Event of the Year: International Café: The ‘International Cafe’ is an informal get together for migrants and expats living on the North West Coast. The event is held on the first Sunday of every month and provides informal support to new migrants by providing a space and social networking opportunity to assist with settlement. It is an avenue for providing information on the education system for children, courses for adults to enrol in, job opportunities, and local events of interest. The International Café is open to any members of public who would like to join.

Young Citizen of the Year: Oliver Bailey: Oliver has been nominated for his excellent leadership capabilities within St Brendan-Shaw College and the wider Devonport community. He has held student selected leadership roles for each of his six years at the College, first as a councillor, then as house captain, culminating in his selection as College co-captain by the Student Representative Council Executive. Oliver has been heavily involved in sporting and social areas at the College. He has contributed to the Devonport region by volunteering, completing 250 logged patrolling hours for the Devonport Surf Lifesaving Club since 2016; undertaking two positions on the Devonport Surf Club Committee in 2020, first aid officer and craft officer. Oliver is a member of Surf Lifesaving Tasmania’s Youth Working Group, and a member of Surf Lifesaving Tasmania’s Statewide Lifesaving Advisory Committee, and has participated in a number of emergency callouts as part of the SLSC’s Emergency Response Team.

Citizen of the Year Award: Bruce and Alida Beattie: Bruce and Alida have been nominated for their tireless work within the community. Bruce and Alida participated in Meals on Wheels during the 1990’s-00s and are Devonport Eisteddfod Society Inc. volunteers. They are Devonport Sister City Association committee members and host visiting delegates from within Devonport and Minamata in Japan. They participated in the Reece High Garden weekends and hosted a Spring Garden Party for the Devonport Presbyterian Church for many years, also hosting students from the Colombo Project. Bruce was a Lions Club member in the 1970’s-00’s and helped with the Miandetta Primary School fair for years. He was part of the Arboretum at Eugenana from the beginning, working every weekend during the 1980’s-90’s and hosted overseas students with the Department of Agriculture in the 1970’s-80’s. Bruce was a Red Shield Appeal door knocker; Secretary of the Devonport Presbyterian Church; member of the Probus Club; ran in the Burnie Ten; and attended Rostrum during the 1970’s. Alida was involved with the Ionians service group during the 1970’s, 80’s and 90’s and a member of the Bridge Club and Embroidery Guild. Alida served on the Devonport Sister City Association as a committee member and later President from the 1980’s-00’s. She is a choir member of the Devonport Presbyterian Church, participated in the Baby Sitting Club and was a President of the Probus Club.

“Spirit of the City” Award: Dr Thomas Sayers: This award acknowledges the wonderful work that Dr Sayers has done for the region, and biodiversity education, while in lockdown. Experienced in the fields of ecology, entomology, and botany, Tom holds PhD in pollination ecology at the University of Melbourne, and a Master of Environmental Management at UTAS Being a keen nature photographer and seeing the significant biodiversity that exists in the Don Reserve inspired Tom to document the reserve on film, while unable to leave the State during the pandemic. It is a high-quality film, showcasing flora and fauna, and has had a huge impact on the local community who have now identified what a great place the Don Reserve really is, rediscovering our own back yard. He has produced a remarkable video that is being enjoyed by many, promoting the region, and celebrating its biodiversity.